If you are planning to visit Brussels, then you may not necessarily have had comic strips in mind. After all, we tend to associate comics with such all-American icons as Superman and Batman, rather than with Belgium. But the truth of the matter is the Belgium in general — and Brussels in particular — has a rich comic strip tradition, and any visitor to the city is liable to find themselves surrounded by colourful comic heroes.

The most relevant point of interest is the so-called comic walk Brussels has to offer its visitors. This is a route that runs through multiple streets in the city, and includes some of the most eye-catching public art on offer: a line-up of Belgian comics greats, daubed onto the walls in brilliant murals, looking as though they are in the middle of their latest adventures. 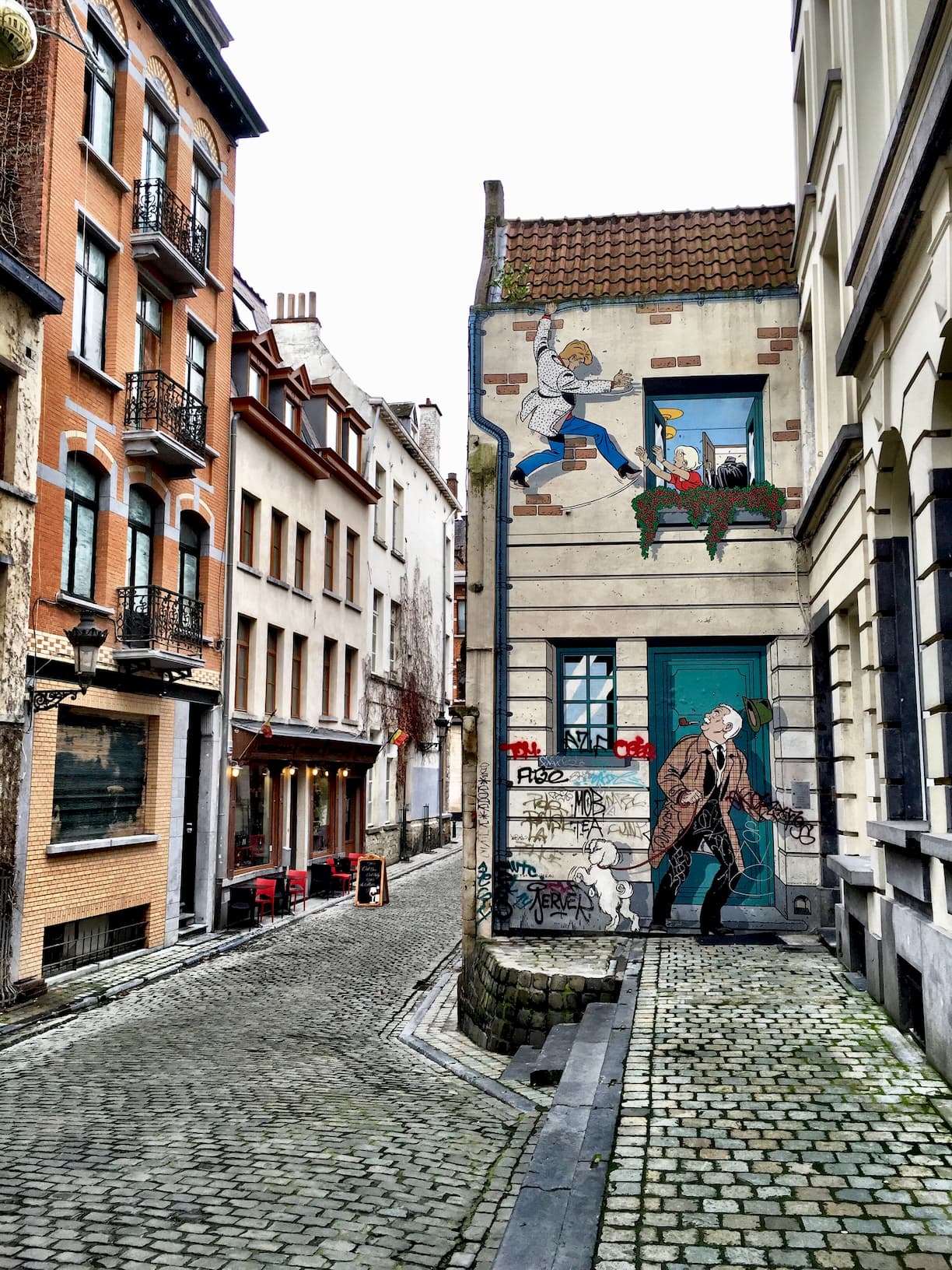 At Rue de l’Étuve you will meet boy reporter Tintin, the most famous of the country’s comic stars. The Brussels comic book route will then take you to Rue du Marché au Charbon, which has been adapted to evoke the weird fantasy worlds imagined by François Schuiten & Benoît Peeters; then comes Rue du Treurenberg, where the dashing swashbuckler known as the Scorpion brandishes his rapier. Mischievous children Spike and Suzy are up to no good at Rue de Laeken, Other characters on offer include cheerful animals Cubitus, Marsupilami and Billy the Cat, along with the trenchcoat-clad heroes Blake and Mortimer — the inventions of Edgard P. Jacobs, one of the most famous Brussels comic strip creators. Not all of the characters on show are Belgian natives: the French comic star Asterix stars in an impressive mural alongside his fellow Gaulish warriors, charging into battle against the hapless Romans.

There are many more characters on show, from space adventurers to cheerful schoolchildren. It is easy to spend an entire day — if not more — basking in this celebration of the greatest comics Brussels has produced, so it is a good idea to choose a well-placed hotel. The Hotel Hubert will make a good choice, offering visitors a comfortable stay and a short trip to the splendid comic walls.

If you are not exhausted by your tour of the murals, there are other comic-related hotspots around Brussels. Don’t forget that this month the city is playing host to the Brussels Comic Con, a convention where you will be able to meet both creators and fellow fans of the medium. Another must-see destination is the Belgian Comic Strip Center, an entire museum dedicated to the medium of comics. Fans of Belgium’s most beloved comic strip son will be eager to visit La Boutique Tintin, a shop dedicated entirely to Tintin products, from the comics themselves to cuddly toys of his faithful dog Snowy.

All in all, for a lover of the comic medium, Brussels will make a perfect place to visit. There will be no shortage of places to visit if you are interested in getting closer to where these immortal characters were born. 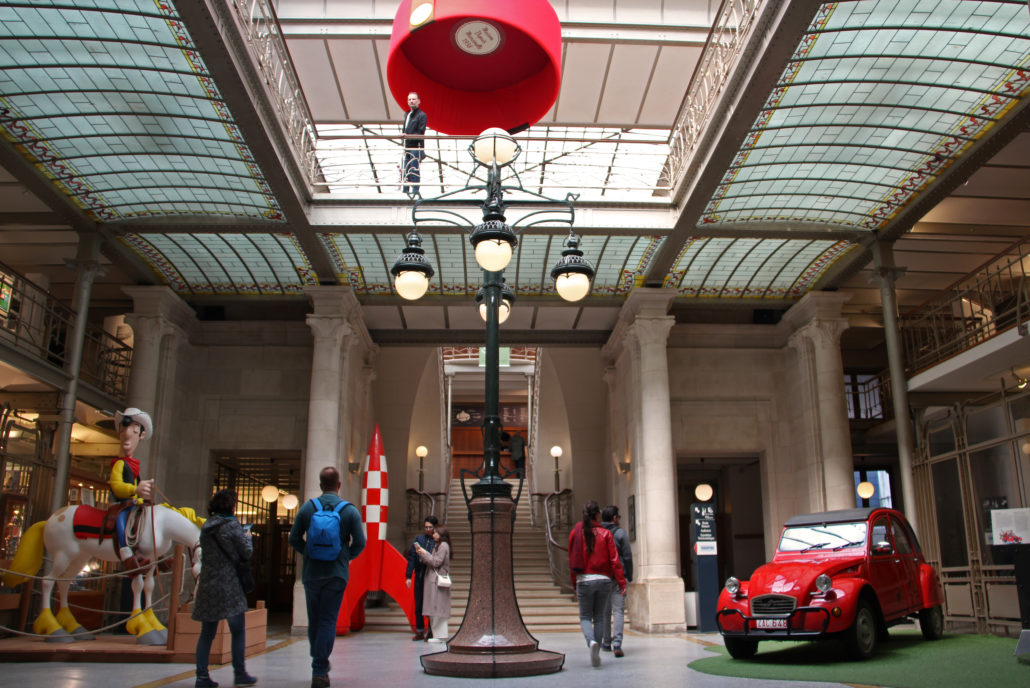 A post card a day keep the doctor away, no? Check

Don't be shy. You don't need to knock, just come i

💡Did you know? @fridakahloimmersive offers you

I want to hear all about yours! Tell me your pet's

Make yourself at home 👑 📸 @erikaneverstops .

Best way to start the week? Aperol Spritz in my li

Welcome to the King Room 👑 It features a ridicu

I don’t serve breakfast, but my good friend @foo

You can tell a wise man by the books he has. Well,

It's that time of the year again in blooming Bruss

Need to work during your stay? 🤓 My Meeting Pod

Thankfully, I have a super housekeeping team not f

What to Expect in Brussels in 2020

A Summer in Brussels: Your Go-To Guide
We use cookies on our website to give you the most relevant experience by remembering your preferences and repeat visits. By clicking “Accept All”, you consent to the use of ALL the cookies. However, you may visit "Cookie Settings" to provide a controlled consent.
Cookie SettingsAccept All Reject All
Manage consent

This website uses cookies to improve your experience while you navigate through the website. Out of these, the cookies that are categorized as necessary are stored on your browser as they are essential for the working of basic functionalities of the website. We also use third-party cookies that help us analyze and understand how you use this website. These cookies will be stored in your browser only with your consent. You also have the option to opt-out of these cookies. But opting out of some of these cookies may affect your browsing experience.
Necessary Always Enabled
Necessary cookies are absolutely essential for the website to function properly. These cookies ensure basic functionalities and security features of the website, anonymously.
Functional
Functional cookies help to perform certain functionalities like sharing the content of the website on social media platforms, collect feedbacks, and other third-party features.
Performance
Performance cookies are used to understand and analyze the key performance indexes of the website which helps in delivering a better user experience for the visitors.
Analytics
Analytical cookies are used to understand how visitors interact with the website. These cookies help provide information on metrics the number of visitors, bounce rate, traffic source, etc.
Advertisement
Advertisement cookies are used to provide visitors with relevant ads and marketing campaigns. These cookies track visitors across websites and collect information to provide customized ads.
Others
Other uncategorized cookies are those that are being analyzed and have not been classified into a category as yet.
SAVE & ACCEPT
Scroll to top